NOTE: This page is currently under reforms and updates.

Arcus, also known as CelWP G17, is a binary star system containing Arcus or Arcus-Emyn, an Red giant star and a Mira variable, as well as Cathica, a small red dwarf with an planetary system. Located in Triangulum's spiral arms, its notable as being the origin and source of the extremely well-known Arcus Nebula, from which the system was named.

Arcus has been heavily studied due to its relatively recent confirmation of its nature as a Thorne-Żytkow object, having a neutron star in its core, which was named Emyn. This inspired scientists all over the galaxy to observe it, and several missions were designed for Arcusan exploration. One of these missions, Stardiver, is a highly ambitious mission to dive into Arcus's core, and to study Emyn up-close in detail. Today, Arcus is an popular tourist destination for the galactic population of Triangulum, with tourism being the main source of income in the region. 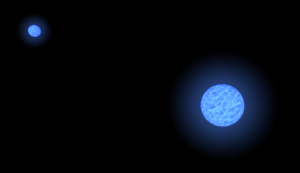 The Arcus system formed as a pair of B-type stars, being orbited by Cathica. Over the course of several million years, Emyn exploded into a neutron star at the same time Arcus was turning into a red giant.

Retrieved from "https://celwp.miraheze.org/w/index.php?title=Arcus&oldid=17211"
Categories:
Cookies help us deliver our services. By using our services, you agree to our use of cookies.