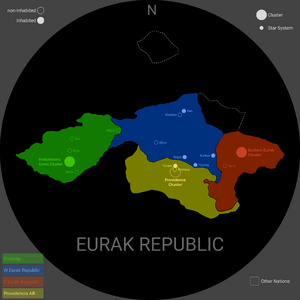 Map of the Eurak Republic and surrounding regions.

The Eurak Republic is divided into three separately controlled regions:

Controlled by a joint union between the Eurak from Euryale and the Arnarans from Arnar. They jointly control the Eastern Eurak Cluster, which includes the systems of Flal, Sacra, Cyosura, Espulu, Psara, Metrad, and Arssuk. The Eastern Eurak are the dominant force in the region, although their dominance has been weakened by the Eurak War.

Spans the relatively sparsely populated region outside of the galactic center, and is controlled by the Kapaldians from Kapaldia. Mostly controls sparse and uncharted areas, and had very little representation in the Eurak Republic until the fallout of the Eurak War.

A newly formed union made up of the Eridons, the dominant species from Enisolg. So far, they control The Evolutionary Cross, Tolenis, The Black Nacre, Xioda and Xirilia, the Auwedosz binary (obviously), the black hole Abyss and 2 rogue planets, Urna and Idra. The NEU is a relatively peaceful nation, always trying diplomacy before any sort of violence. This is good for their civilisation which has only had one major war in the relatively distant past. The nation also controls the extremely rapidly spinning B type star Memrand, and is currently starlifting it in an experiment. Their target is just 0.03 solar masses, as this is their first attempt at starlifting, which is going well so far. They were also planning to quickly starlift or destroy the oxygen-sequence Wolf-Rayet star Najerari before it dies in around 4,000 years, but new research shows that the star will likely undergo an un-nova and be relatively harmless to the surrounding environment.

State of Nakaa: A state formed from the regions controlled by the Reneans and Narvans, after a three-century war over control of the Elkor system. They currently control Nakaa's three stars, the rogue asteroid Orok, and a rogue planet, Orel.

Arness Nation: A small nation in the Arness system, whose home planet is Maren. They currently only control the Arness, and recently gained representation in the Union after a heated series of negotiations, some of which involved bombings of the Helium-3 mines on Salyth.

Samilia Confederacy: I have to put this here, but this will have no info as Planetkid doesn't want to write about this civilization yet. (He probably never will)

Kyran Confederacy: A large nation who is mainly controlled by the Karon, the dominant species on the incredibly young terraformed planet Kyra. They currently control Acra, Bora, Exerihan, the Komeru System, and the Ronel System.

Proxa: The second smallest state in the Federation, it is controlled by the Pron, the main species on Proxa in the Cracca system.

The United Laygo Group of Civilizations (Laygo Group): The smallest nation, they only control the Hawking system from their home planet Laygo. However, once the system is fully colonized, they plan to colonize Casalis, an orange hypergiant (and one of the brightest stars in the galaxy), and starlift it for resources.

State of Erelai: A large state made up of the Skavra, a species on the ocean world of Kanota. It currently controls half of the Distos Cluster, including Erelai and Distos.

Republic of Kimea: A slightly smaller state made up of the Seiderm, a similar species on the ocean world Hijnantre. It currently controls the other half of the Distos Cluster, including Azalea and Vellerar.

Retrieved from "https://celwp.miraheze.org/w/index.php?title=Civilizations&oldid=17059"
Categories:
Cookies help us deliver our services. By using our services, you agree to our use of cookies.