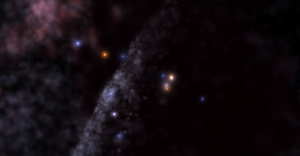 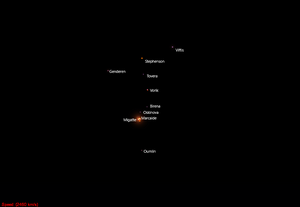 The Marcaide Cluster from Euryale. Note the heavy reddening, due to dust in the Raincloud Nebula, and intervening dust clouds between Euryale and the cluster.

The Marcaide Cluster is a dense cluster of very massive and bright stars located inside the Raincloud Nebula. It contains notable star systems such as Migatte, which contains Goku (the brightest star in the galaxy); Marcaide, a yellow hypergiant-yellow-giant-blue main sequence star system; the Vorik system, a trinary system which contains Sander, a highly evolved oxygen-sequence Wolf-Rayet star (also named after Andreas Sander, an astronomer); Viftis, a very bright O-type main-sequence-star contact binary; and many others.

Note: The luminosities are bolometric

The Raincloud Nebula conceals a small yellowish nebula called the Marcaide Nebula. It is mostly gas ionised by the solar winds of the stars in the Marcaide Cluster, but some of it is also the ejected gas from powerful solar winds, especially the ones from the Marcaide System.

Only 3 stars in this cluster have planets. They are Guandalini, Goku and Oumlin. Goku has a planet known as Gohan, which is a gas giant. Oumlin's planet is known as Thuland, and is a neptune-like planet with rings and square storms on its poles. Guandalini has two gas giant planets.

Retrieved from "https://celwp.miraheze.org/w/index.php?title=Marcaide_Cluster&oldid=17245"
Categories:
Cookies help us deliver our services. By using our services, you agree to our use of cookies.