Caloris, also known as CelWP G4, is a triple star system, consisting of 3 stars: the red subgiant Abalo (Caloris A), the A-type Luminsar (Caloris B), and the red dwarf Conal (Caloris C). Its also one of the systems with the largest number of planets, totaling 28, one of which (Ontora) hosts the habitable moon Candacia, in the Luminsar subsystem. Its the home system of the Calorean Kingdom, and also notable for its extensive planetary and asteroidal system, while containing several Great Comets. 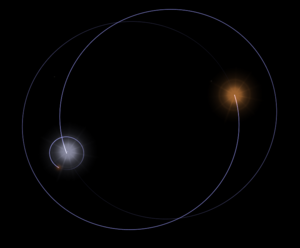 Orbits of the stars in Caloris.

Luminsar and Conal are separated by 40 AU, with minimum eccentricity and inclination, and has an orbital period of 178.86 years. The pair and Abalo also orbit each other once every 4772.3 years. Caloris AB-Cs orbit is slightly eccentric, e = 0.1805; their closest approach is 368.77 AU (55.3 billion km), and their furthest separation is 531.23 AU (79.7 billion km). The stars are currently just after periapsis.

The three stars are vastly differet from each other, which makes measuring the age of the Caloris system quite difficult. Due to this, its unknown what are the remaining lifespans of any of the components.

Abalo, the primary star of the system. The Solace Nebula (top left), the Arcus Nebula, and the Bora MCC (top center-right) are visible in the background.
Main article: Abalo

Abalo is an late K-type red subgiant, and its well known for its unusually calm and smooth photosphere. Due to this, photospheric mapping was really difficult in early Candacian astronomy, and some astronomers even classified it as an "blank star". The star has nearly exausted all of its hydrogen, and its stellar composition is 96% helium, 2.2% hydrogen, 1.7% metalic elements, and 0.1% others. The relatively high amount of metal is likely due to absorbed planets from back it was an main sequence star.

Retrieved from "https://celwp.miraheze.org/w/index.php?title=Caloris&oldid=17265"
Categories:
Cookies help us deliver our services. By using our services, you agree to our use of cookies.