Desolation, also known as YAN-1 and CelWP G12, is a cold, old brown dwarf located in the Young Angel Nebula, or YAN. It is currently the only brown dwarf in the YAN, and was the second object to be added in that region.

Desolation is a Y-type brown dwarf, the coldest kind of brown dwarf. These stars are less than 500 K in temperature and are completely invisible to the naked eye. The very hottest Y dwarfs, like Psara (Y0), may be able to glow faintly with an extremely red colour, but Desolation is too cold. It is so dim that even at just 0.1 AU, any glow from Desolation is beyond visibility at magnitude 14.7.

Desolation is a very old brown dwarf, at over 6 billion years old. Coupled with its small mass, this allows Desolation to cool down to temperatures below the freezing point of water, and so practically all of its light comes from the infrared. Desolation's atmosphere has a very high abundance of water and carbon-rich compounds such as carbon dioxide and carbonic acid. Bluish clouds of water-rich gases are present and are strangely visible from space as bands of blue. 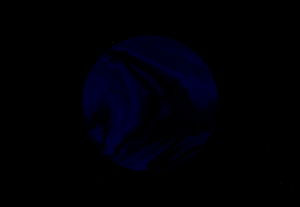 Artist's impression of Desolation, with no disk.

Desolation is surrounded by a blue disk of unidentified matter.

Retrieved from "https://celwp.miraheze.org/w/index.php?title=Desolation&oldid=17093"
Categories:
Cookies help us deliver our services. By using our services, you agree to our use of cookies.