The Endurance Galaxy, also known as CelWP G-G1, is an dwarf spiral galaxy in intense star formation, with the highest rates of stellar birth in any galaxy of the universe. Its also covered in many H II regions that span the entire galaxy. Its origin is rooted on Rongya, a heavy-wind blue straggler which is also the brightest star in the galaxy. The rapid formation of Endurance is considered the most extreme example of the domino effect in history. 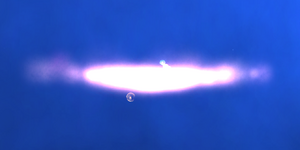 Side view of Endurance. Notice how Rongya is easily visible here.

- Rongya, the birth star that marked the origin of this galaxy.

- Nerise, the nearest star system to Rongya, with its own planetary system.

Endurance also has an unique feature among satellite galaxies: it has its own dwarf satellite galaxies as well. Five of then are known so far, with most of then being dwarf spheroidals. They are named Endeavour, Enterprise, Envisage, Encourage, and Envision.

Retrieved from "https://celwp.miraheze.org/w/index.php?title=Endurance_Galaxy&oldid=17160"
Categories:
Cookies help us deliver our services. By using our services, you agree to our use of cookies.