Fasoreus, also known as Arssuk c, MOL 13 c, or CelWP F6 c, is the second and outermost planet orbiting the F-type main sequence star Arssuk. Fasoreus is a gas giant around half the mass of Saturn and was added in Release 2. 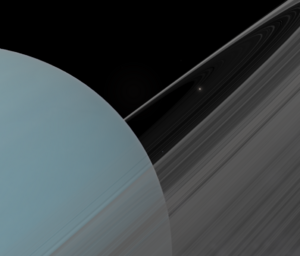 A close-up of Fasoreus and its rings.

Fasoreus is a quiet gas giant, lacking the large storms, bands, and contrast of other gas giants. Fasoreus is a pale powder blue color, and is orbited by a set of rings and one moon, Derana. Fasoreus is in the habitable zone of its star, however it lacks any habitable moon that could host life. Fasoreus is around 50 Earth masses, or around half of Saturn's mass and three times that of Neptune. Fasoreus's radius is around 30,000 km, or larger than Neptune and approximately half the size of Saturn and Jupiter.

Retrieved from "https://celwp.miraheze.org/w/index.php?title=Fasoreus&oldid=6171"
Categories:
Cookies help us deliver our services. By using our services, you agree to our use of cookies.