Lucifer, also known as CelWP G8 b, is a tidally heated planet orbiting around the white dwarf Cassiel, and is around 1.1 times the mass of Earth. It was added in Release 8, and albeit solitary, it also hosts a large and extensive tail. 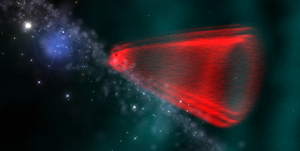 Lucifer is one of the most extreme and deadly planets in the entire galaxy. Not only is it subject to extreme tides from Cassiel, but it also has its orbit shortened by the same tides (via tidal decay), orbital decay from the dust in the Young Angel Nebula supernova remnant, Kozai-Lidov mechanism effects, etc. In addition, the planet's surface is being blasted away by Cassiel's winds, creating a vast, cone-like tail of ejected materials. This exposes a colder surface, which itself is blasted away, causing intense mass loss. The temperature varies between 2500 K (star-facing side, coldest parts of the exposed surface) and 6500 K (hottest parts of the far side), which also shows a process of rejuvenation of the craterless surface.

Lucifer is also known for its eerie, cone-like tail, which is caused by matter being blown away from its surface by fierce stellar winds. Due to its temperature, which reaches 2000 K at some points, it glows red. Its also extensive, with the tail being measured several million kilometers long.

Retrieved from "https://celwp.miraheze.org/w/index.php?title=Lucifer&oldid=17349"
Categories:
Cookies help us deliver our services. By using our services, you agree to our use of cookies.