Maura, also known as CelWP G2, is a rogue gas giant orbiting around The Eye of Providence, and is around 90 times the mass of Earth. It was added in Release 2, and has two known moons, named Dakaron and Darrari. 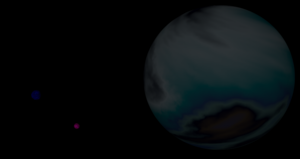 Artist's impression of Maura and its moons, without the background scenery.

Maura is a cold, Saturn-sized rogue planet in the nucleus of Triangulum, orbiting the galaxy's central black hole. As a result, its ionized clouds are glowing from the sheer radiation emitted by the jets, being exposed so close to the black hole duo. Maura is made up of ethane, argon, and organic compounds, with small amounts of ozone, oxygen, nitrogen, CO2, and methane, as well as traces of copper, fluorine, caesium, cyanide, and trifluoronitrosomethane; the origin of the trace amounts of CF3NO is really unknown. Maura is known to possess two large moons, but surveys haven't confirmed any rings in the Maura system. It is theorised that the lack of rings is related to the moons themselves, but further research is needed in order to confirm this. 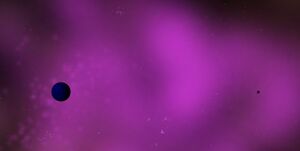 Low-FOV view of Maura's moons. Dakaron is at the left, while Darrari is at the right.

The largest and potentially innermost moon of Maura, Dakaron has a distinct deep blue color, suggesting that it's not native to the Maura system. A widely accepted explanation is that Dakaron was a small pulsar planet ejected from a nearby system in the Providence Cluster.

The outermost known moon of Maura, Darrari is notable due to the discovery of a sub-surface ocean during a mining operation on the moon. It was a rapid survey, so no in-depth observations were made, but it's known that the oceans have water, liquified due to the pressures and heat. Darrari is also tectonically active, being the closest object to the central black hole to have cryovolcanoes.

Animation of 3 discovery images. Daraka is the smudge moving northwest, starting near the center of the image.

Currently unconfirmed, Daraka is thought to be an asteroidal moon roughly 70 kilometers across, in a distant, inclined, and very eccentric orbit. It's thought to be a piece of debris from the accretion disk of The Eye of Providence, likely ejected by its smaller companion, and captured by Maura, albeit some scientists argue that an possible ejection from Martana's asteroid belt is more likely.

A theorised ring system around Maura has been the topic of heated discussions in the community. Recent surveys had disproven any rings past the orbit of Dakaron, albeit speculation remains strong for any unknown moons and rings close to Maura. A mission heading very close to Maura might detect the hidden rings in the system, but as of now, Maura is effectively ringless.

Even though the system seems to be extremely hostile, Maura and its moons have shown signs of life below the surface.

It is speculated that Maura hosts a ocean made of copper deep inside the clouds, which has been melted into a liquid due to the sheer pressures. Spanning a few hundred kilometers in depth, the hypothetical ocean, nicknamed "Mauppe Ocean", is theorised to host copper-based lifeforms. If confirmed, this will be the first known instance of a planet with completely copper-based life in the known universe.

Some samples taken from Dakaron showed some structures that appeared similar to fossils at a microscopic scale. The claim that these fossils were ancient lifeforms back when Dakaron was a pulsar planet was strongly refuted by the scientific community in the past, but recent studies show that this might actually be the case. Whether or not these were actually lifeforms is unknown.

Darrari has several geysers scattered across the surface, and has a known sub-surface ocean. Naturally, this brought scientists to speculate some sort of aquatic multicellular life deep below the surface. It's unknown whether the lifeforms there actually exist, but a mission is being proposed to study the oceans in Darrari to find lifeforms in the moon.

Retrieved from "https://celwp.miraheze.org/w/index.php?title=Maura&oldid=17005"
Categories:
Cookies help us deliver our services. By using our services, you agree to our use of cookies.