The Pisces Dwarf galaxy, also known as LGS 3, is a small satellite galaxy of Triangulum. It is a dwarf spheroidal or dwarf irregular galaxy 326 light-years in radius, with about 350,000 stars. There is little current star formation, and most stars in this galaxy are old red stars; however, there are some nebulae and young star clusters on the edges of the galaxy. As of the present day, the galaxy is ruled by the Esserian Empire, a reclusive nation with little to no relations with the nations of Triangulum, Endurance, and Eqien's Object. 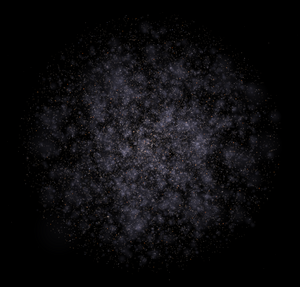 The Pisces Dwarf galaxy in Celestia.
Retrieved from "https://celwp.miraheze.org/w/index.php?title=Pisces_Dwarf&oldid=17329"
Categories:
Cookies help us deliver our services. By using our services, you agree to our use of cookies.