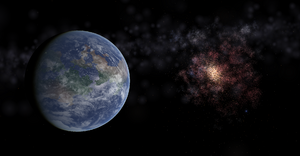 The Providence Nebula as seen from Euryale.

The Providence Nebula is an H II region located at the core of Triangulum, and a prominent sight in the skies of all the core worlds.

The nebula has an associated massive star cluster - the Providence Cluster. Near the center of this cluster is an intermediate-mass black hole, the Eye of Providence, which is the central black hole of Triangulum. The nebula contains an ultraluminous X-ray source; in fact, the most luminous such source in the Local Group; this is caused by the Eye's continuous accretion of nebular gas.

Planets are rare in the Providence Cluster, as close approaches between stars make it difficult for planets to form. However, some stars have formed planetary systems, and there are also some rogue planets in the cluster.

The Eurak Republic holds some control over the Providence region, but the region is not part of any polity.

Although the Providence region is fictional, Triangulum really does have an H II region at its core which contains an ultraluminous X-ray source. SevenSpheres created the nebula (really just reused a nebula model by Cham), but no single person really created the Providence region - Lafuente_Astronomy created the central black hole and thus the original concept, Gurren Lagann generated the filler stars in the cluster, and fyr02 created some of the lore for the region.

Retrieved from "https://celwp.miraheze.org/w/index.php?title=Providence_Nebula&oldid=17199"
Categories:
Cookies help us deliver our services. By using our services, you agree to our use of cookies.