Regar, also known as MOL 2 or CelWP F4, is a G-type main sequence star located in the Western Eurak Region. Currently Regar is controlled by the Kapaldian Autonomous Union, or KAU, and was an important landmark star during the March of Liberation. Regar is also known to host three exoplanets, with one of them, Alezia, being an ocean planet in the habitable zone. Although it has an F-Series designation of F4, it was added in Release 6 by fyr02.

Regar is a G1 main sequence dwarf around 1.3 times the mass of the Sun. It has a mean temperature of 5940 K and is quiet, rarely hosting flares or other stellar wind phenomena. Regar is somewhat isolated, being somewhat close to Rizikon as well as the galactic center, which contains The Eye of Providence and the associated Providence Cluster. Three largely unbuilt transport lanes extend from Regar to Rizikon, Yuzhou, and Tonero. 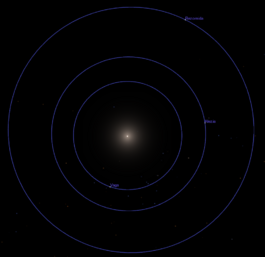 A diagram of the Regar system.

One of these planets, Alezia, is an ocean planet that sits in Regar's habitable zone.

Regar remained relatively untouched for most of its history. VWAVE radial velocity data showed the existence of three planets, however the faint Eastern Eurak Nebula in the way meant that the orbital parameters were largely unconstrained. The lack of interest in the system was broken during the Eurak War when the Kapaldian Liberation Task Force left Rizikon, starting the March of Liberation. Their original target was Tonero, but because of increased fuel consumption they stopped at Regar, where they discovered the second planet, Alezia, had liquid water. The while recovering resources the task force briefly surveyed the rest of the system before the task force left. After the Eurak War, the system was given the name MOL 2 in commemoration of stars that were visited during the March of Liberation. 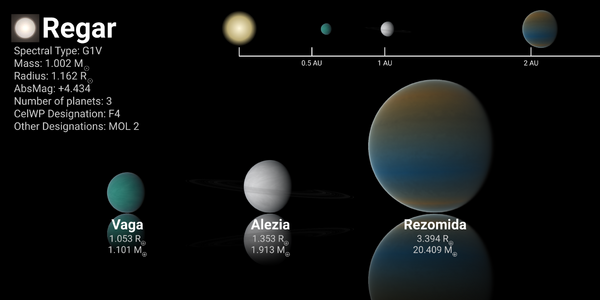 Regar system infographic.
Retrieved from "https://celwp.miraheze.org/w/index.php?title=Regar&oldid=17307"
Categories:
Cookies help us deliver our services. By using our services, you agree to our use of cookies.