The Triangulum Galaxy, also known as M 33, is a spiral galaxy that is the third largest member of the Local Group, and the main galaxy the Celestia Worldbuilding Project is based in. It is 28,120 light-years in radius, containing around 40 billion stars and many H II regions with active star formation. Trianglum also has many sapient species and civilizations. 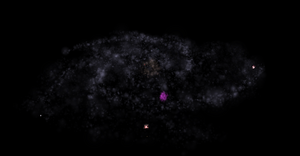 The Triangulum Galaxy in Celestia.

Triangulum has around 60 globular clusters, including the Sanctuary Cluster.

Triangulum has several satellite galaxies, though less than larger spiral galaxies like Andromeda. These include the Pisces Dwarf, Eqien's Galaxy, and the Endurance Galaxy.

Retrieved from "https://celwp.miraheze.org/w/index.php?title=Triangulum_Galaxy&oldid=17144"
Categories:
Cookies help us deliver our services. By using our services, you agree to our use of cookies.